In this review we talk about Aeon Drive, an indie platformer where each level will be finished within 30 seconds

In this review we will tell you about Aeon Drive, a title made by the independent developers of 2 awesome Studio, already authors of an old-style 2D shooter that also serves as a prequel to this title called Dimension Drive. Aeon Drive instead completely changes genre, becoming an adrenaline-pumping platformer with levels that can be completed in just 30 seconds. To do this, however, it will take a lot of skill and training, in fact, despite the classic platformer gameplay, each level could be compared to a puzzle to be solved in the fewest possible moves.

The title is already available on various platforms, currently Aeon Drive is present on PS4, PS5, Xbox One and Series S / X, Steam and Nintendo Switch. It is evident that the main focus of the game is based on an old school arcade soul, which could captivate the most nostalgic gamers. So let's analyze in detail all the aspects on which this new and particular platform is based.

30 seconds to save the world

The story of the game has as its protagonist Jackelyne Tywood, a space ranger from another dimension. Her journey will be abruptly interrupted by an accident that will land her on planet Earth, but in a future era. The woman will find herself missing in the city of Neo Barcelona, a future version of the famous Spanish city, where she will be captured and imprisoned by the forces of the city. Jackelyne will be helped by Edge, the Artificial Intelligence of your spaceship that will help you with valuable advice and tips on what to do to escape.

The problem is that the crash of Jack's spaceship, as it is called by friends, caused the dispersion of some energy cells that risk blow up the entire planet. The woman will only have 30 seconds in each level to recover the cell and save the world. Fortunately, she will be able to count on a special power that will allow her to have extra time through special time bubbles. The story of Aeon Drive is ultimately just a pretext to stage levels to be finished at supersonic speeds in the ten areas from which the title is composed.

As explained at the beginning of this Aeon Drive review, the title has a purely soul arcade. The actions that we can perform are extremely basic: we can in fact jump, slide, use a sword to defeat enemies with one blow and, above all, use a special dagger to teleport us within the level. This mechanic is the main one that will help us finish the levels in the shortest possible time. The accuracy of the dagger, especially in stressful situations, is not always the best and we will have to get used to it to be able to direct us in the right position.

The title does not allow to waste too much time during a level, we will have only 30 seconds to finish it, although collecting special cores scattered throughout the level will increase the time. As the levels progress, these will become increasingly difficult, and in addition to our fight against time we will also have to face traps, obstacles, enemy robots, attack turrets and much more. Everything can kill us in one fell swoop forcing us to start the level all over again. In reality the 30 seconds, once taken the hand will also become superfluous, and the arcade soul of the title will emerge in the attempts to be able to finish the levels in the shortest possible time, which is also supported by a world leaderboard in which to enter your scores. 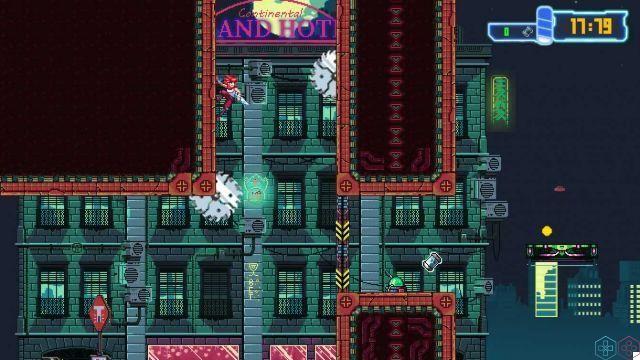 The title is not very long, finishing all the levels depends on the skill of the player, but it won't take more than circa 4 o 5 ore to exaggerate. During our test for the Aeon Drive review we spent about 4 hours replaying some levels several times to improve the times. The game indeed it is not for everyone, given that it is quite demanding and above all competitive, since it aims at high replayability.


In addition, the title can also be played in four players simultaneously online, in challenges that will see the winner the first player who manages to finish a level. In this case the camera expands to always show all the players on the screen, even if sometimes the action is confusing when it is already always frenetic. The title graphically comes with a good one pixel art, which, however, is not excellent and you can find much better around. 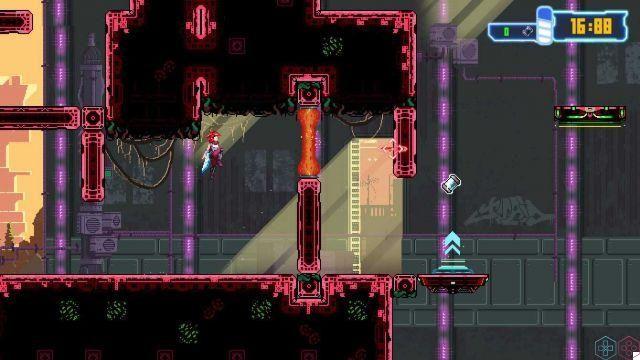 Arrived at the end of this review by Aeon Drive, we can say that the title is very specific in what it wants to do and it is aimed at an audience that loves challenges and is interested in competing for the best scores. If you get caught up in the loop of repeating the same level over and over until you get a completion time that is close to perfection and then bullshit it with your friends, then you might find this title interesting, otherwise there is not much else as content than this game can offer you. It is certainly a good exponent for those looking for hardcore platformers following the line of other similar titles like Super Meat Boy or Crash bandicoot.

Age of Empires IV review: the return of the King ❯

add a comment of Aeon Drive Review: A fast-paced platformer