A Robot Named Fight! Review: a roguelike metroidvania with aliens

A caciarone indie and nice to play. Let's go and see together A Robot Named Fight !: a roguelike metroidvania in which we will slaughter an infinity of aliens (with satisfaction)

In recent years, more and more videogames pay homage to the masterpieces of the past. However, in some cases these games reinterpret some outdated game mechanics, but to which there is still something to say. Matt Bitner Games, an independent one man software house, offers a metroidvania roguelike with graphics in pixel art which aims to entertain and make you spend quite a few hours in lightheartedness. A Robot Named Fight! will he have succeeded in this purpose? Let's find out together.

On the title's website we read: “A millennium of peace has passed since the mechanical gods ascended, leaving the robots to take care of the world. But something forgotten and terrible has awakened among the stars… ”.

A Robot Named Fight !: feel in a science fiction movie with aliens | Review

Atmosfera steampunk, aliens, gore e robot: if you are a lover of Years' 80, you are lovers of Metroidvania and you are teased by the elements just mentioned, you will certainly not be disappointed by A Robot Named Fight!. In this indie with a "captivating" name (A Robot Called Fight!) We will be called to arms as a robot to defeat an alien menace "of flesh": A giant monster made of monsters that releases monsters that make blood and guts splash. 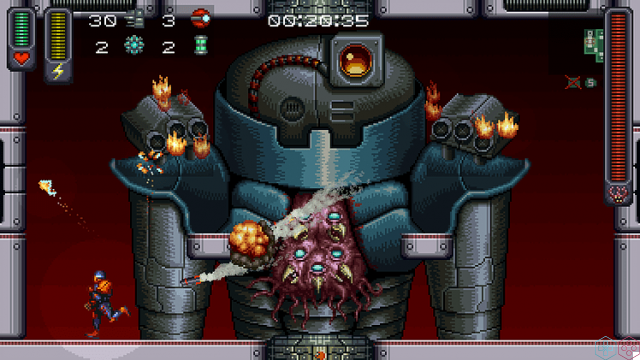 The game is made in one curest pixel art, which makes everything retro and beautiful to look at. The bosses above all, are really "monstrous" and enjoyable from an aesthetic point of view. There sound component it also looks good, with few but effective musical themes that will be replaced according to the game area in which we will be (you can listen to them on the YouTube channel dedicated to the game). The FX are also well cared for, and there are no particular sonic flaws to report. Really good work.

At the beginning of each game, a dying robot will give us some useful advice, and then we can start our adventure: and this will be the only tutorial available (fortunately). In a nutshell, the game experience consists of exploring the game areas and collecting items and upgrades that will give us the necessary skills to move forward and unlock new areas, until we have collected all those necessary to access the area where the final boss and after defeating him to conclude our adventure.

All very similar to Super Metroid, which is good and that also affects i controls: there are no unreal collisions or situations that can get out of hand to the player due to flaws in programming and level design.

It will be up to you to figure out how many and which items to deliver to receive an upgrade in your stats or to completely restore your health. If you go wrong you will suffer a temporary reduction in your stats.

Speaking of gameplay, given the nature roguelike of ARNF !, with each new game (and game over) the layout of the areas and the available objects will change, making us actually have to deal with a "new game".


If you are daring, but still want to have the opportunity to test with almost clinical confidence everything that a single run of this roguelike metroidvania has to offer you (enemies, objects and game area schemes), for you there is the classic seeded mode which in case of game over allows you to play again in a previously experienced game layout via password.

In any case, keep in mind that a single run will take you about a couple of hours to complete the whole game by unlocking all the areas and objects present. And unfortunately it must be pointed out that the difficulty level is lower, and the patterns of the enemies are easily identifiable, and you will hardly die in the boss fight, even in the final one. You might think this means that the game is simple and repetitive, and you are partly right.

The unlockable objects are many and the objectives to unlock them as many (if you play the title on Steam, viewing the Achievements will certainly help you understand what to do), the layouts of the game areas are very varied, however this title brings with it all the flaws of roguelikes.

Although the software algorithm may vary the arrangement of objects, enemies and areas, it is inevitable that after a certain amount of runs your desire to play could diminish. However, before this happens you may have spent at least a good twenty to thirty hours on the title.

To whom would you recommend the metroidvania roguelike A Robot Named Fight !? For fans of metroidvania, for those who like platformers and for those who want to kill some aliens in carefree, with an experience that returns a fantastic glance and is accompanied by a good soundtrack.

A title that it will hardly put you to the test if you are accustomed to even a minimum of the genre, but which will still be able to give you several hours of fun. ARNF! does not bring any particular news to the videogame panorama, but it could be for you a pleasant pastime even considering the price at which it is sold.

We are talking about 12.99 € for the PC version available on Steam, which you can find at this link. And now that the summer sales are on, you can buy it at 6.49. A Robot Named Fight! is available for PS4, Xbox One, PC, Linux and Nintendo Switch.

Agents of Mayhem review: the heir of Saints Row ❯

add a comment of A Robot Named Fight! Review: a roguelike metroidvania with aliens