The famous Nintendo brand relaunches the Trading Card Game with a board game for the whole family, the Pokémon Battle Academy

Designed for all types of Trainers, including parents and children who are entering the world of the Pokémon TCG for the first time; The Battle Academy revisits the Pokémon TCG strategy by offering an easy and fun gameplay experience. It is suitable for the whole family and comes in the format of a classic board game.

"For over twenty years, the hugely popular Pokémon Trading Card Game has brought together people from all over the world who share the same passion and who love to collect cards, trade them with friends, and participate in official Pokémon battles"; said JC Smith, Senior Director of Consumer Marketing for The Pokémon Company International. "With the Fight Academy, we are happy to offer families a simple and fun way to have a good time together and to give the opportunity to deepen the bonds through something that children and longtime fans are passionate about: the cards of the Pokémon TCG. "

The Battle Academy has everything a Trainer needs to learn the basics of the Pokémon TCG: each box includes a rigid game board for two players, three 60-card decks, how-to guides, game accessories, plus one code card for the free Pokémon Trading Card Game Online app, available on compatible iOS and Android mobile devices or on Pokemon.it.

For more information on the Battle Academy, visit: tcg.pokemon.com/en-gb/battleacademy/.

Pokémon and board games

In addition to the above statement, perhaps it is also worth making a digression on the combination of Pokémon and board games.
It is certainly known to all that, since 1996, any object with the yellow and blue logo on it is an announced success; the sheer size of "branded" products is almost embarrassing, especially in Japan.
Among this multitude, some certainly stand out who have defined the genre and the way we perceive it; I'm referring to the anime and the Trading Card Game.


They enjoyed the epochal success of the Nintendo platform game, which, we recall, is the most successful video game series in history; in fact, it is estimated a volume of profits close to 90 billion dollars. The second title in the standings is just a third of the value and it is Super Mario, just to stay at Nintendo. 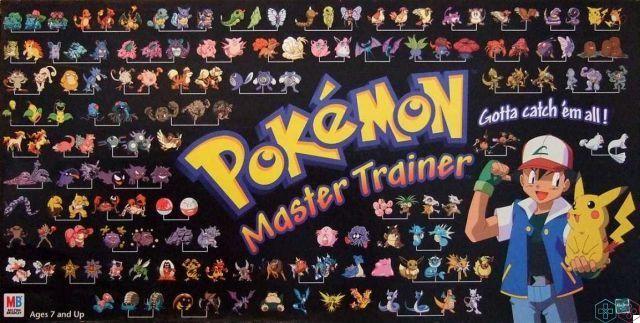 Board games: the absent greats

Let's consider the macro categories of entertainment: books and comics, television and cinema, toys, video games, board and role games, etc .; the Pokémon title stands out for its absence from the world of board games. Something to tell the truth had been attempted with Pokémon Master Trainer, but if we look at the success in the remaining categories, the impact on board games is close to zero.

A hope coming for Pokèmon after the Fighting Academy?

When the undersigned, a lover of both the Pokémon world and the intricate cosmos of board games, read the announcement of the Pokémon Fighting Academy, he couldn't help but get excited. And yet, after carefully examining what it was, a hint of regret spoiled the news; it is in fact a preparatory set for the Trading Card Game, as many were offered and sold as early as 1999 (in some cases even complete with CD-rom).

Here is the deflation of that bubble of hope that saw the Pokèmon make their triumphal entry into the world of boardgaming, as late as that unattainable star of the playful landscape that they are. Looking around, however, we see that more and more companies are entrusting the growing world of board games with promoting their video game; ranging from Dark Souls to Fallout 76, from DOOM to Bloodborne, without forgetting the classic of classics, namely World of Warcraft. And in this regard, Blizzard Entertainment has decided to return to betting on table games to keep its most profitable title interesting and populated, announcing, after more than fifteen years, a new board game.


We can therefore only wait and hope that Nintendo will also choose to imitate its competitors, claiming for itself a slice of the golden age of parlor games; in the meantime, we hope that the decision to announce the Pokémon Fighting Academy as a board game will lead us in this direction.

Asmodee: here are all the summer releases ❯

add a comment of A new Pokémon title arrives: the Battle Academy