Are you about to start a The King's Dilemma campaign? Here are our 10 tips to better enjoy this new adventure!

If there's one thing we've learned over the past few weeks, it's that The King's Dilemma isn't just any game. The new legacy of the Ghenos Game house is in fact a small narrative pearl that needs time, atmosphere and concentration to give the best of itself. For this reason, today we have decided to summarize some small strategies for you: 10 tips to implement to make the fifteen hours on The King's Dilemma an unparalleled adventure. These are all tricks to be implemented at the table with playmates, precautions that will allow you to immerse yourself in the kingdom of Ankhist in the best possible way. Put them into practice before starting each game (and during), and you will be able to experience this game in all its depth. 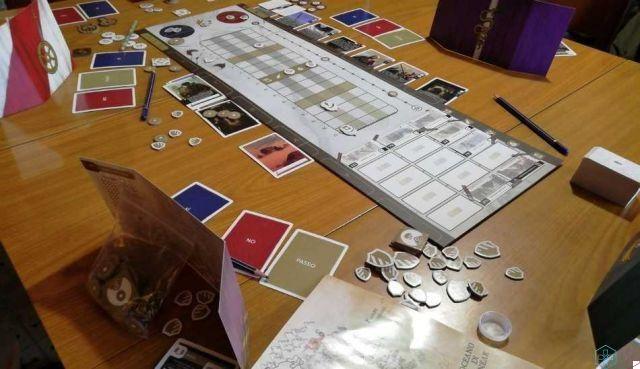 The first piece of advice we would like to give you is also the one in our fundamental opinion: choose carefully who to play with. The King's Dilemma is indeed a game that requires enthusiasm and immersion to give the best of oneself. Make sure you start this campaign with someone who, like you, is already passionate about the setting and the ideas revealed by the incipit of the story. In this way, you will make sure to make each game intense and more realistic and you will avoid annoying moments of "meta-game" and breaking the narrative flow.

2. Try to always play with the same group

This second point is a natural consequence of the first. As the game also suggests, the best way to experience The King's Dilemma is to always play it with the same group of players.. Although there is in fact the possibility of adding new houses and replacing players who leave the campaign, the thread is lost if you replace some of the personalities in the game. If you get the chance, try to play with someone who will guarantee you will be there for the whole story; you will then have a permanent Council that will remember past events (hopefully, take a look at points 7 and 8 to be sure) and that will be able to make the best future decisions.

There is nothing better than good music to create the right atmosphere at the table. The soundtracks of medieval films are obviously very suitable, but any soundtrack you drop in the right mood is perfect for the purpose.. In addition, you can think of "furnishing" the game table with some small props: goblets, hats, rings and so on, everything that helps you to take on the role of the noble families of Ankist is welcome. And if you have some red wine available, you can also pour it into your glasses to feel a little Cercei Lannister too.

4. Choose a house that is congenial to you

The King's Dilemma campaign is a long one and is all about the choices you make in Council meetings. For this, our suggestion is to choose a house that is in your hearts. You will have to impersonate the members of your family for over 15 hours and it will be easier if you are part of a house that represents you. Then of course, if you have the spirit of role-playing players and want to test yourself, then also playing a house opposite to you can be a source of fun. What matters is that you always feel comfortable with the choices you will have to make.

5. Give yourself all the time you need

And now we come to the useful tips during your games of The King's Dilemma. First, make sure you have plenty of time to enjoy the game in progress. It is best not to start a new game session if you know you will need to suspend it shortly thereafter. In fact, many choices take time to be pondered and discussed in the Council and it is good to give yourself time to talk if you want to enjoy the game to its fullest. Better to put off until a few days later than being forced to end a captivating debate in half.

6. Drop into the part

Closely related to step 4, our second advice during the game is to totally get into the part. You are one of the most powerful nobles of Ankist, you have from your power, wealth and authority. Don't be afraid to express your opinions and stand up to the table, even when it seems like you are going against the tide. In The King's Dilemma it is the dialectic that makes you win the games. Unleash yours in all its power!

6. Enjoy the story and don't pay too much attention to the scores

I know I know. For power players… sorry, competitive players among you this point might seem like a heresy. But The King's Dilemma, let me tell you, is not a game for chasing victory at all costs. It's a narrative game and, as such, it's at making the narrative go its best that you should aim for. Then of course, if in the meantime you also manage to grab the victory no one will harm you, but if you find yourself having to choose between scoring more points and rolling well, then our advice is: give priority to the second. History will reward you.

Between one game and another

7. Make use of the save slots but also take photos

The save slot is perhaps the most valuable ally for your campaign. At Ghenos Games they thought about it well and gave us the perfect way to "save" the game in progress and pick up where it left off. But this is not always enough. It happens, for example, that during transport the cards stacked in the box move and at that point it is not easy to remember in which order the various events were released. To avoid losing the point, you can take a picture of the game board before suspending the game, framing both the story cards and the events that have already been released.. So you won't have any problems next time and the game will restart without wasting time on reconstructing what happened.

8. Write down the highlight events

Always for the same speech as in point 7, writing to you from time to time the key events that occurred during the current government can also be an excellent idea. For example, note which were the main Dilemmas and which, why not, the votes of each member of the Council. This will give you the opportunity to go back to the story the next time and, above all, to blame the other nobles for incorrect decisions taken in the past. Do you want to add the pleasure of saying to one of the other players: "your ancestor's ineptitude was so striking that in our family we still talk about when ..."?

9. Make a little summary before starting over

After taking photos and pinning events, all you have to do is summarize everything before starting the new game. You can reread from the slips of paper or, why not, have the best narrator among you declaim what happened in previous governments. For the more daring and well-disposed, even a nice old-fashioned "report" to distribute to other players could be a great way to inaugurate the new government of Ankist.

And finally… | The King's Dilemma

The last of our tips speaks for itself: The King's Dilemma, like all storytelling games, works best when you stay immersed in the game world. The more time passes between one game and another, the more the thread of the story frays; so, whenever possible, try to see each other often, and not to let too much time pass between games. If this is not possible, however, tips 7-8 and 9 should ensure that you return to Ankist with all the essentials to enjoy the game in all its glory.

Ankh: Gods of Egypt, the gameplay of the next CMON hit ❯